The Red Sea is home to amazing Reefs with a teeming marine life, pelagic fishes, Reef Sharks, Dolphins, and even the very rare Dugong. The Red Sea can be divided into two parts:

The North Red Sea with the resort destinations such as Sharm El Sheikh, Hurghada, and the more laidback Dahab (which is the most popular part). Sharm El Sheikh offers excellent wreck diving and even maybe the best wreck dive in the world, the Thistlegorm Wreck! Not far from there is the Ras Mohammed National Park with great wall diving and amazing coral formations. The second biggest diving destination in Egypt is Hurghada. It offers good conditions to learn scuba diving as well as great wreck diving with 4 beautiful wrecks to explore in Abu Nuhas Reef. Dahab located a bit more North has a more chilled out atmosphere and is famous worldwide for the Dahab Blue Hole.

The South Red Sea is less popular and offers much less crowded dive sites and pristine reefs with superb coral. Most of the people coming here are experienced divers looking for world-class scuba diving. Marsa Alam is the main gateway to explore this area and features amazing opportunities and for many people the best diving in Egypt. You can for example go on a day trip to explore the World famous Elphinstone Reef for challenging drift dives. You will have the chance to encounter the rare and curious Oceanic Whitetip Shark, Hammerhead Sharks as well as various reef Sharks! Other superb dive sites such as Abu Dabbab offer the opportunity to dive with the very rare and endangered Dugong as well as giant Green Sea Turtles. Fury Shoals is also very famous for the most pristine Reefs of Egypt and for giving the possibility to swim with Dolphins at the Dolphins House reef!

In this page you will find more detailed information about scuba diving in Red Sea.

The Sinai Peninsula and Gulf of Aqaba

The Sinai Peninsula and finger-like Gulf of Aqaba is a fascinating area, located in the northern Red Sea. It’s rich in history and mystery, legend and mystique. In terms of diving, there are many options, as the area includes four different countries within close proximity, all with a stretch of Red Sea coastline – namely Egypt, Israel, Jordan, and Saudi Arabia, though it’s much more straightforward to visit the first three.

On the southeastern side of the Sinai is the resort and diving hub of Sharm El-Sheik and Na’ama Bay, where it’s possible to book dayboats to nearby reefs such as Jackson and Woodhouse in the Straits of Tiran, or Jackfish Alley and the spectacular Ras Mohammed to the south, and even further-flung long days out to the famous wreck of the Thistlegorm. Alternatively, you can head out to more-remote dive sites in the general area on a liveaboard.

As inexperienced divers back in 1998, we gained experience on the daily boat dives and reveled in our first wreck penetration on the wreck of the Thistlegorm. Eleven years later in 2009, we enjoyed a great liveaboard week from Sharm, visiting some sites visited by the dayboats as well as more distant reefs such as Abu Nuhas, where the excellent Giannis D, Chrisoula K, and Carnatic wrecks can be dived.

Sharm is also the entry point for the dive spots of Dahab, Nuweiba and Taba further up the Gulf of Aqaba on the Egyptian Sinai. In the recent past, we enjoyed a visit to Dahab, visiting the Blue Hole, a range of reef sites dived from shore using minibuses and pick-ups and also some boat diving. Additionally, there’s some productive seagrass beds, even in front of the town itself where seahorses and ghost pipefish are possible. Sadly, all the areas north of Sharm itself are currently in the ‘do not visit’ list of the Foreign and Commonwealth Office.

At the northern end of the Gulf of Aqaba are the Israeli and Jordanian Red Sea coasts. Neither country boasts huge tracts of Red Sea diving, but what they do have is good. Way back in 1997, we enjoyed our first-ever foreign dive trip, basing ourselves at the Israeli town of Eilat following a recommendation from our dive instructor, who’d recently certified us. We enjoyed our first taste of diving in clear warm water at easy sites such as Moses Rock, seeing moray eels, scorpionfish, lionfish and a myriad of reef inhabitants for the first time.

Though we’ve not dived the Jordanian part of this area, it is reputed to be good, with a range of good reefs and wrecks to tempt divers (Ed – I can confirm Aqaba has some great diving, including a C-130 Hercules, the Cedar Pride wreck and coral reefs teeming with marine life). Over on the eastern side is Saudi Arabia, which I’ll describe further on in the feature.

The Egyptian coast, on the mainland of the African continent, has a lot of diving options, from resort-based dayboat diving, more simplistic and rustic dive camps, and choices of the liveaboard.

In the north are the resort areas of Hurghada and El Gouna, where many international hotel chains have set up shop. From here, there’s plenty of options for dayboat diving, which visit areas such as Giftun and Gubal Islands. Back in 1999, a year after our first Red Sea diving visit, we tried Hurghada. It was popular then and remains so today.

In 2015, we visited the excellent Roots Dive Camp north of El Quseir, which we really enjoyed. At this clean, welcoming, and friendly dive camp, we went back to nature and visited a variety of dive sites from both shore and using local boats, and I even went out to the excellent Abu Kufan reef on a full day from Safaga (the Roots team arranged the transfer). Visits to the Red Sea diving favorite of Elphinstone, where oceanic whitetips are regularly seen, can also be arranged from here.

Further south again is Marsa Alam and Port Ghalib, where again there’s shore-based diving possible as well as liveaboards. We had a great week on an itinerary visiting St John’s, Fury Shoals, and Abu Dabbab back in 2008, where we enjoyed fantastic underwater scenery in brilliant conditions.

The Deep South (western side)

Down in the deep south are Sudan, Eritrea, and Djibouti. There are liveaboards that visit areas of the Sudanese Red Sea diving and to dive there is to see the Red Sea in its most pristine and unvisited. These trips tend to be for experienced divers and will cost more than the areas that are easier to reach.

Eritrea is even less known than Sudan, though there are areas reputed to be excellent, such as the Dahlak Archipelago, however, there is very little infrastructure currently. Along the Eritrean coast, there must be countless stunning dive sites awaiting discovery. Perhaps the occasional exploratory trip may visit the area – it’d be a very interesting thing to do.

Djibouti is a small country located in the Horn of Africa, in the area where the Red Sea and the Gulf of Aden meet. In terms of diving, it’s known for the seasonal gatherings of whalesharks that can be encountered between October and February. Though I haven’t done this trip, I know others who have and rated it highly as an experience.

On the eastern side, there’s Yemen and Saudi Arabia. Due to the current civil war and instability, Yemen is off-limits, but Saudi Arabia, with its vast coastline, is an interesting prospect.

Back in 2001, we visited Saudi Arabia, diving with the Jeddah-based Desert Sea Divers, who were very good. In writing this feature, I checked and found that they are still operating, so divers wishing for something different might be interested in considering it. There’s plenty of flights to Jeddah from the UK.

For our trip, the bureaucracy surrounding our visit was a bit of a palaver, involving us having to visit the Saudi embassy in London with our marriage certificate and an ‘invitation to visit the country’ from the dive center in order to get the necessary visas. I doubt if much has changed, but anyone wishing to do it would have to check on the current entry requirements. Divers that do visit will be rewarded with excellent reef and wreck diving without the crowds, with the Ann Ann wreck being a superb dive (as good as any of the Abu Nuhas wrecks).

So far, we’ve been fortunate enough to do eight Red Sea diving trips (and counting). For newbie divers, a visit can inspire a diving odyssey that can last a lifetime, and for experienced divers, it’s clear why they return time and time again.

When you ‘see red’ for the first time, it’s magical, and you’ll probably want to go back. And there’s plenty of choices. 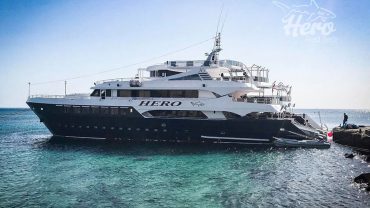